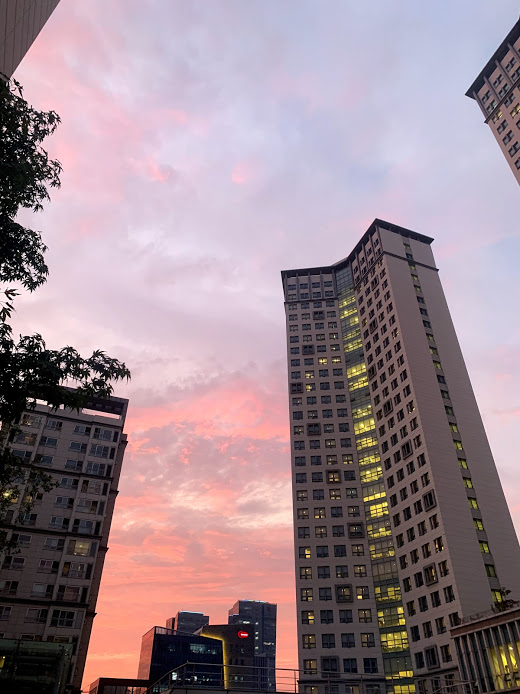 View of IGC Dorm B Building at sunset. Despite the beautiful atmosphere, many students are unsatisfied with the customer service of the Incheon Global Campus. (Photo Courtesy of Jessica Slovon).

Most complaints stem from lack of information and poor communication as well as many problems with the housing office and dorm facilities. In addition to this, some international students find it hard to communicate with IGC staffs despite it being an English-speaking campus.

One student recounts their experience with IGC staffs during the check-in period explaining that she was not given essential information to get into her dormitory. “As a first semester freshman on campus, I didn’t know what I was doing. The housing office didn’t tell me how to get into my room or how to work the air con. The buttons are in Korean and I tried to translate them but some of it didn’t make sense.” This student further explained that they had to go to the housing office four times on their first day because of essential information that was not provided to them.

This student also described how it was difficult to communicate with the staffs and they did not understand what she was asking at first. “I tried to ask if they had directions for the air conditioner and how to set up the wifi but they didn’t understand me. After standing there for five minutes while they talked to each other in Korean, they tried to give me another welcome book and said they couldn’t help.”

This brings up more concerns about whether of not the IGC staff are trained with aspects of the dormitory rooms. Considering that the campus has been open since 2012, it should be well aware of its amenities and how they work. As well as be able to provide that information to students when they first arrive.

Two female students from UAC experienced an emergency situation and could not contact the housing office. “We were locked out of the apartment my friend is staying in with her mom who is a professor because the keypad stopped working, We did not have internet connection either because the IGC wifi did not reach and we couldn’t connect to her wifi. I tried to call the number for IGC that is on the back of our student ID cards but I was connected to George Mason Korea Universities information desk, which was closed at the time,” one of the students explained.

The UAC student also expressed her concerns with communicating with the housing office. She described how her and her friend, who are both international students, attempted to explain the situation to the staffs but they did not understand. “It took nearly two hours to get back into the apartment when the solution was just to get a key for it.”

Another student described how they were given the wrong dorm room information and had been assigned a room that already had someone in it. They also were concerned about the fact that despite having a “Check-out Inspection”, her room had a broken air conditioner and plumbing problems when she arrived.

In regard to payment processes, they process has changed the past two semesters creating some confusion among students. IGC has also made a few mistakes when processing students payments. Multiple international students have talked about how IGC reportedly lost their payment and they almost had to pay again.

There have also been situations where an international students housing application has been cancelled without any notice or reason and IGC did not give any alternate options or instructions on what to do next.

A UAC student explained that “the [housing] process isn’t hard, but most of the time they mess up something and you have to go down to the office to fix it.” This creates a lot of inconvenience for students who are busy with classes and extracurriculars during the semester and who usually fly home during the long breaks.

A former Resident Advisor (RA) for the IGC Female B Dorm expressed their disapproval of IGC as well. They explained that the RA’s were given very tight deadlines to complete tasks and didn’t fully consider their responsibilities as students. They also mentioned that it took forever for RA’s and other students to get responses from IGC Staff.

In addition, the former RA mentioned that the water filters in the kitchens are not always clean. While they were working, they had many complaints about seeing bugs in the water containers and of how dirty the rooms where when they arrived.

They also explained how a student on their floor had to move rooms because their room contained spots of mold under the windows, below the air conditioner and in the bathroom. They also detailed how often times students would put in maintenance requests for their rooms that would go unanswered or would say completed but in reality, maintenance never came to fix the problem.

Additionally, when maintenance came to fix a problem in the former RA’s dorm, the maintenance personelle left tracks of dirt in their room and used their bathroom without their knowledge. They said, “when I came back to my room there were tracks on the floor and my toilet had been used.”

A few international students discussed how IGC does not provide maps or any instructions on the campus facilities when freshman arrive on campus. “When I got here, I was expecting to be given a bit more than a booklet with how to change the password on my door and how to use the laundry machine.” One student explained.

Another mentioned that it was very different from American Universities. “I got a welcome packet from school but there was nothing about the campus, only about our building. I didn’t really know where anything was. I had no idea that there was a convenience store on campus until an upperclassman showed me. There is no instruction in the lecture halls in the MCB (Multi-Complex Building) and we have to pay an insane amount of money to use the pool. I also was unaware of the other grade-level school that proceeds in the basement of the campus. I was shocked about how much I didn’t know about my own campus, it made me feel like an outsider.”

Many university students were also confused about the use of IGC facilities. Besides the gyms and dance studios, there is not much information about the other facilities available on campus. There is an auditorium and an art building that seem to go unused each semester.

IGC is a collaboration between the Korean Government and Incheon Metropolitan City to provide a new opportunity for education in Korea and to create the next generation of global leaders. University staffs are hired by the school’s main campus faculty while IGC staffs have no relation and are hired separately.