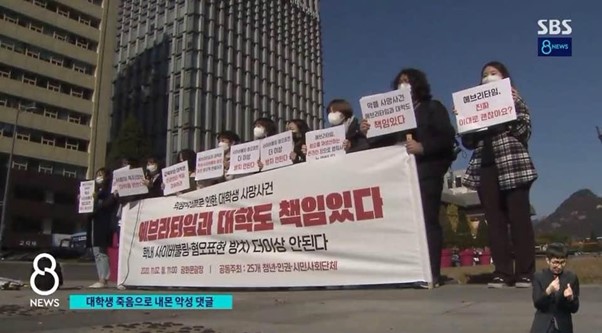 On November 2, in Gwanghwamun Square students protested about the university student’s death due to “Everytime”. Students claim “Everytime” should be held responsible for the students death due to the mismanagement of rude comments on the Seoul Girl’s University Page. (Photo Courtesy of ‘SBS News’ YouTube Channel)

Anonymous community comments and replies to a female university student on the Everytime app lead to her suicide on October 8. Postings about the now deceased student encouraged her to commit suicide after suffering from depression for a long time. Students and critics express that the app’s creator and the students’ university should be held responsible for her death and the actions of the anonymous students.

Everytime is an app for university students where they can keep track of assignments, class schedules and post questions to their university bulletin board. Students of that university can reply to the posts to help other students all while staying anonymous.

Student A (a Seoul Girl’s University student) consistently posted her difficulties about suffering from depression to her school bulletin board in Everytime. However, abusive comments were consistently posted on her postings about consolation. In an anonymous message board, some students ridiculed Student A and furthermore, instigated her to commit suicide. These messages continued for 2 years.

In Student A’s suicide note, she said, “It was so painful. Please punish anonymous offenders in Everytime.”

According to Student A’s mother, “My kid was with a sore heart, but some bad students pushed her who was hanging from the end of the cliff. It is like they lead her to death.”

Her mother added, “My daughter has already died. However, behind the name of ‘Anonymity’, students who role play the devil and talk without thinking must be removed. These similar accidents should not have occurred.”

Family of the deceased sued online haters who made malicious comments by charges of insulting. However, the investigation is difficult since Everytime is anonymous space, it is hard to find and designate actual cyber offenders.

Even if cyber police track IP addresses with a warrant, it is still not easy to identify people. This is because personal information is removed if users withdraw their account from application.

Along with the protest of 25 youth/human right/citizens organizations, Everytime defined lists of prohibited acts such as prohibition of  rude talk. However, even if students violate this rule, there is no special binding action.

From Seoul Girl’s University opinion, due to the reason that Everytime is a space that only students can use, it did not figure out the truth of this case. Many voices expressed that the school and application manager should reinforce the responsibility of management to prevent other damage.

With enthusiastic requests, Everytime for University of Utah Asia Campus students are open since April, 2020. Currently, UAC students use Everytime for information exchange such as how to speak English well like a native American or how to have a healthy school life. Or some students truly tell their secrets to counsel by borrowing the positive functions of anonymity.

So far, Everytime users of UAC students are using this online community for public interest, however, they should always remind that hateful comments with anonymity can hurt or ruin someone’s life.

UAC was established in September 2014 in South Korea. The undergraduate students can spend a maximum of 3 years studying at the UAC in Korea, and then study for a minimum of 1 year at the University of Utah in Salt Lake City.