UAC Student Presents at the International Academic Forum about Kongan 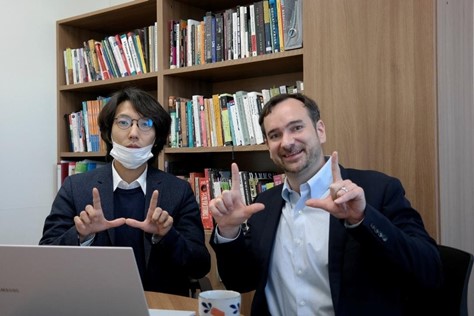 Byunghoon and H. Schuckman presented at the IAFOR on Nov. 2. (Photo Courtesy of the University of Utah Asia Campus)

Byunghoon Oh, a junior majoring in psychology presented his research at the International Academic Forum (IAFOR) on November 2. The IAFOR was founded in Nagoya, Japan and is a place for scholars to exchange their knowledge, ideas, culture and network. This year, in response to the widespread pandemic, the forum was held virtually, thus giving Byunghoon the opportunity to present his research about Seon Buddhist Kongan.

Kongan is referred to as a public record or case in Chinese. It tries to explain the unexplained which is somewhat incomprehensible, surprising, surreal and contradictory. “Two hands clap and there is a sound. What is the sound of one hand?” This is a saying from a Zen master Hakuin Ekaku and an example Byunghoon gave while explaining the ambiguous concept of Seon capping phrases and Kongan.

His research, “Before Thinking Mind: The Role of Capping Phrases in Korean Seon Buddhist Kongan” was aimed to widely spread the idea of the Korean Seon capping phrases and promote the importance and the exclusiveness of the Korean Kongan.

“Studying this field requires you to let go of the search for one true answer. Being open to your surrounding circumstance by accepting others insight and ultimately attaining Nirvana is what the whole study is about,” Byunghoon explained.

He also mentioned the impressive part of the Seung Sahn Sunim’s (Zen master) word. Every time the monk was asked the question of his purpose of starting his missionary work in America other than places like Africa where people are on the brink of death, he would reply that the mind of hunger of human beings is even bigger than physical hunger. His reason is to feed the people who are mentally hungry so that they can grow up to understand their true selves.

Byunghoon also stressed the endless possibility as a scholar studying at the University of Utah. He briefly described his past of wandering around, not knowing what to do. However, after coming across the field of philosophy, he decided to start his study from the very beginning; at the UAC. “The main reason I decided to publish my story in the Songdo Chronicle is to inspire scholars like me and to send a message of hope not to give up.”

Byunghoon ended the interview with a remark, “I also want to sincerely thank professor H. Schuckman for giving me an opportunity to participate at the IAFOR.” He plans to continue his study of Kongan by interviewing Zen masters (e.g. Hye Tong Sunim) on their usage of Kongan in their missionary work.