Relaxed Regulation by Government will Expand Customer Base of Electric Scooter Operators from Dec. 10 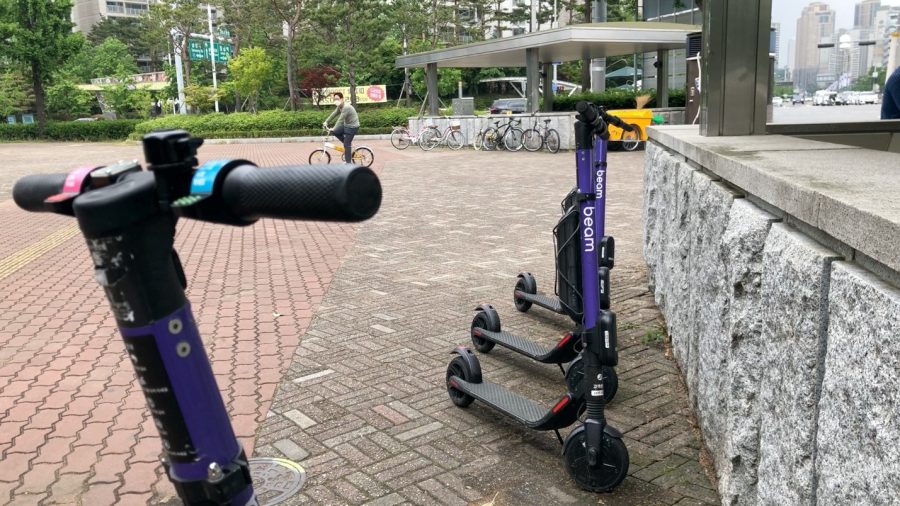 The Korean government has announced its decision to expand the target customer base of electric scooters starting from December 10, 2020.  The new legislation will allow anyone aged 13 or older to ride electric kickboards with or without a driver’s license. This sudden change of law has aroused instant responses up from the citizens. The most outstanding positive reaction of those who go along with this change chose economic and time efficiency as their basis.

Jisoo Lee, an undergraduate student of Yonsei University studying business management said that she is “quite satiated with the change this time.” She added that “As a student who is currently living in Songdo, it is really convenient to ride electric scooters.” She also mentioned that it is really useful for college students to ride electric scooters outside because it is cheap. She stated that “It is really hard for college students to drive a car. As a result, I had to take a taxi before. (Thus,) I am deeply appreciated by the change in the law.”

A 29-year-old office worker who works nearby Central Park in Songdo, Minho Son, expressed gratitude to the government official for this shift. He explained that he had suffered from severe rush-hour traffic snarls every morning and night on his way to and from work. “It was a nightmare. I had to walk more than 30 minutes from the bus station to my office. It is really annoying when you leave your house 2 or 3 hours early in the morning but somehow gets late at work.”

He expected that this change would definitely improve the quality of his lifestyle by saving him from traffic congestion. He summarized how he feels about the situation with two words, “Can’t wait.” On the contrary, there are many people worrying about the sudden redirection of the traffic policy. They argued the danger of electric scooters on the road and have brought up a conversation about those who break rules.

Dongchan Kim, an undergraduate student of Ghent University Global Campus, left his comment on expanding the customer base of the ride. He said “It is too dangerous for the car drivers. The more inappropriate riders such as young teenagers and unlicensed are out on the road, the more accidents and fatalities will likely increase.”

Following his claim, the targets of the government guidelines are eventually teenagers with immature judgment. Allowing them to drive scooters without an additional safety education or a strong level of safety regulation would create a terrible situation. Moreover, he said that he sees a lot of people riding a kickboard together. “I saw two people riding on the kickboard near the Incheon Global Campus in Songdo,” adding, “As it weighs more, it seems to be shaking more than I have ever seen before.”

Furthermore, there are several kickboard users running on the road without helmets and other safety equipment, which threatens not only people taking a ride but also walking people on the street. According to Article 50 paragraph 10 of the revised Road Traffic Act, drivers of personal mobility devices shall not drive with their passengers in excess of the number of passengers prescribed by the Ministry of Public Administration and Security.

Following the data of The Seoul Metropolitan Fire Disasters headquarters, the “number of bicycles and electric scooter accidents for the last three years is over 23,938 and 19,150 people were transported to action.” In particular, 289 cases had been reported for the last two years with 8 deaths in the case of electric kickboard accidents in Incheon only.