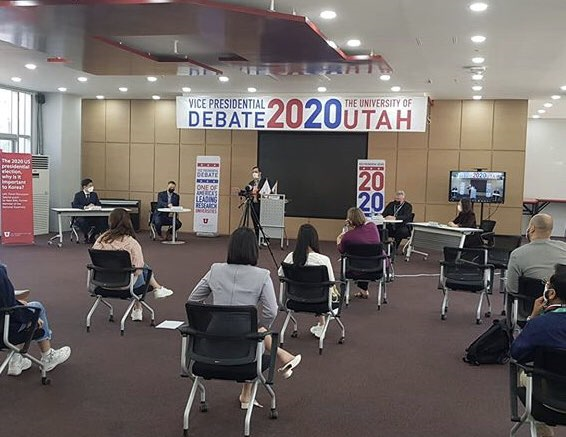 To understand the importance of the US Vice-presidential debate and its implication on Korea, a five-man panel discussion group explored different aspects of the V.P. debate between Senator Kamala Harris and Vice President Mike Pence, held at the University of Utah, Salt Lake City.

Led by Dr. Porter Morgan, the panel discussion, held at UAC Arches Hall on Thursday, October 8th, examined how US elections will impact South Korea’s relations within northeast Asia. The 30-minute panel discussion was streamed online via Zoom with about 50 participants live in the hall.

Commenting on the panel, Porter Morgan, assistant professor of political science at UAC, said he was glad that the panel went well in general.

Despite the positive side, he mentioned that there were small lists of problems that he had hoped to improve. Since only 50 participants were invited to the offline meeting in the Arches Hall of UAC building due to Covid-19, Professor Morgan, stated, “If the event had not been socially distanced, we would have had more energy and could have responded to the crowd a lot more.”

To elaborate on this, Dr. Morgan meant that if people were close in distance and wore no mask, participants could have shared more discussion with each other which would have created an energic atmosphere. Also, if there was a larger crowd not limiting to only 50 participants, there could’ve been a longer Q and A session between the participants and the panelists.

In addition, he added that this was not the only problem he experienced during the panel. He continued, “In the beginning of the panel, my mic was on reverb which caused the echo sound effect. But the bigger problem was that the panel itself felt very short to me. As soon as we got going, it felt like we had to stop.”

By this, Dr. Morgan meant that the time- 30 minutes was totally insufficient for the panelists to do justice to the topic discussed.

Furthermore, Mike Park, a junior communications major in journalism, pointed out a problem related to the arrangement of the panelists. He expressed, “We were able to invite former National Assembly member Kim Se Yeon to the panel, who was very forthcoming about his affiliation to the Conservative party and his personal opinions regarding the debate, which was greatly appreciated.”

“What I thought was problematic with this was that we were unable to hear from a practicing political figure from the other side, which left the discussion greatly one-sided and potentially dogmatic,” he stressed.

“In the future, I hope that we will be able to balance out panel or forum participants better, so that we can provide fairer discussions and ideas to our community,” he suggested.

In sum, he was gratified that it was otherwise greatly appealing by allowing students to not only participate offline but also online via Zoom.

With this in mind, to elaborate on how it felt as a global student to attend such meeting, Shin Young Kwon, a junior communications major, claimed that “It was interesting to see because we do not have positions like vice president nor the re-election systems that US has. So, it was somewhat fresh to recognize how the panelists were trying to analyze different focuses and tactics that each candidate was having.”

Jihun Kim, a sophomore psychology major, said her major takeaway from the panel discussion is that it gave her additional insight into American politics as the panel focused on U.S. policies in terms of COVID-19, Green New Deal, and Black Lives Matter.

The University of Utah Asia Campus is one of the four colleges on Incheon Global Campus (IGC). It is an extended college of the University of Utah located in Salt Lake City. The UAC was opened on September 1, 2014. Currently, UAC offers five undergraduate programs- Communication, Psychology, Film and Media Arts, Urban Ecology, and Civil Engineering. Also, two graduate courses in Biomedical Informatics and Master’s in Public Health.

The campus is located in Songdo, South Korea. All students will receive a University of Utah degree if they spend three years studying at UAC and one year in Salt Lake City.