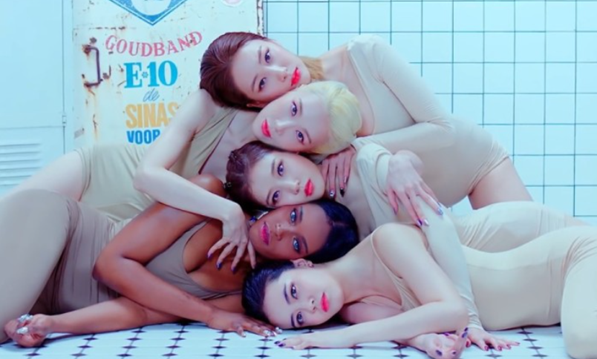 Black Swan members pose in one of the scenes from their most recent comeback. (Photo Courtesy of Black Swan's "Tonight" MV)

The recruitment of a black girl in the K-pop industry was a big issue within social media. The group, Black Swan held their re-debut on Oct. 16 with a new face, Fatou. This is exciting news to both the K-pop industry and to black people as Korea is now acknowledging its multi-cultural diversity. However, the roots of K-pop is influenced by black music and K-pop has to do more than scouting a black idol.

“The beat is very heavy, it’s very catchy. It’s the type of thing where I think after this, I’d be with my friends in the car where they want to play this with the windows down in L.A. cause it sounded like gangster rap,” Miranda Larsen, a K-pop scholar studying at the University of Tokyo clearly stated her feelings during a podcast after listening to a piece from BTS called, We are Bulletproof pt.2.

Then is this cultural appropriation? Idols in Korea are mostly unaware of how their styles might offend the black communities. Their hairstyles, clothing, and even their music styles have come from the demands of the music industry without the artists realizing that their appearance might evoke rage among certain groups.

Miranda asserts that K-pop using black culture is cultural misappropriation, “This is something registered as cool. And I’m going to use it without quite understanding the resonance it has to the communities.” We often see idols with reggae/cornrows, wearing heavy gold chain necklaces and baggy clothes, and creating buzzwords like 힙하다(a.k.a. trendy) to describe the fashion-conscious era. Yet, these artists didn’t have the intention to insult anyone. To quote Miranda’s words, it was the early purpose of the music industries to produce black music with Koreans idols.

Concerns about the current K-pop industry is leveling up with the lack of knowledge in the midst of globalization. As the popularity of K-pop is spreading worldwide, it has become an obligation for the artists to respect and be aware of their slightest action of this sensitive matter.

As Korea is a nation known for its mono-ethnicity, education of cultural appropriation or concepts of diverse ethnicity is unfamiliar among Koreans. However, as K-pop is becoming a culture shared by lots of countries, Korea is exposing itself to the positive effects of globalization in one aspect.

UAC held a forum about Black Lives Matter in Korea on Oct. 14 and gave insights into how it feels like to be the only black in a mono-ethnic country and how things have changed dramatically within the few years. Movie nights screening the history of the black culture are also held to keep students informed and appreciate the black culture.