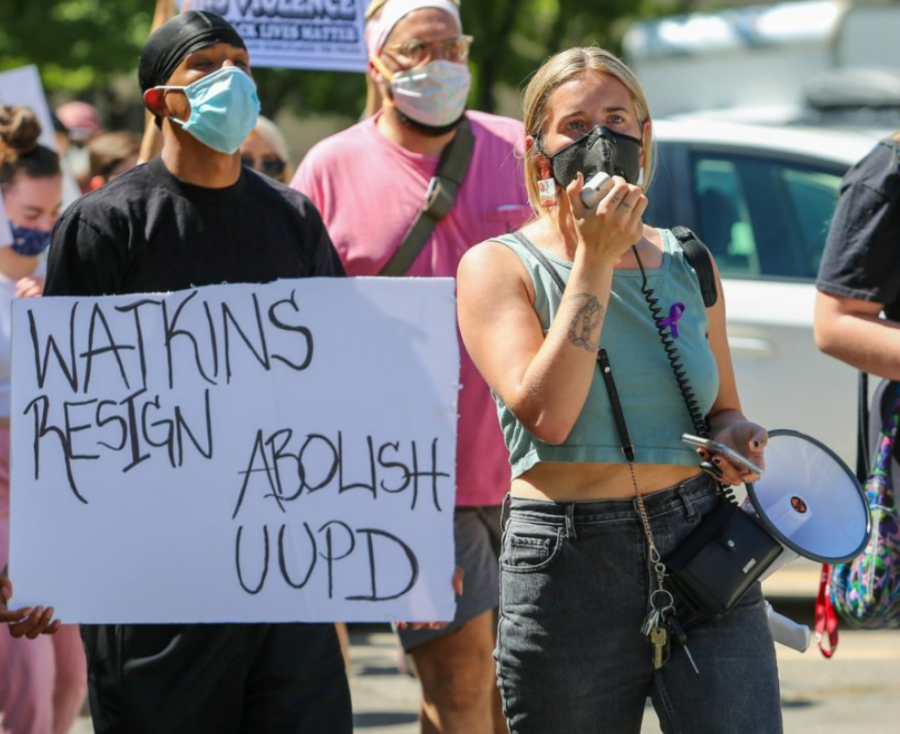 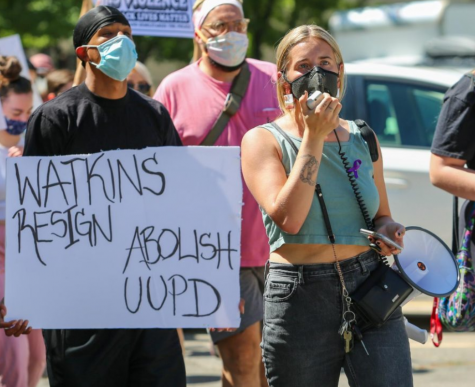 About 50 students gathered at Rice-Eccles Stadium to march to President’s Circle carrying signs and chanting their disapproval for U President Ruth Watkins and administration at the University of Utah.

The protest was created by the popular Instagram account and student organization, Unsafe U. Many days in advance, the protest was advertised through their Instagram, with many students re-posting it.

Included in their planning was a virtual protest for those who could not attend, with action items for students to participate in like emailing the Utah Board of Higher Education or the U Board of Trustees.

Students, alumni and the public rallied behind specific demands surrounding the idea that the administration system must change fundamentally. The demands included the resignation of Watkins by the end of the 2020-21 academic year and that the university does not default to hiring Vice President of Student Affairs Lori McDonald into her position.

Students said Watkins is not to be trusted, and until her resignation, they will not feel safe on campus.

“Everything that keeps happening [after Lauren McCluskey’s death] continues to support the fact that there’s no trust to be had in them whatsoever. I do not feel safe walking through campus. Nothing has changed, overall. We are becoming just more aware of it. I don’t want anything to happen to me, or anyone here in general. There has to be change,” said Victoria Wolfe, a third-year student in the Actor Training Program.

Unsafe U has released information on Watkins allowing students to decide if she is someone they can trust. The information includes a rape case from June where Watkins may have been involved in covering up evidence and failure to ensure o fficer Miguel Deras was investigated for his crimes against Lauren McCluskey.

Founder of Unsafe U Rebecca Hardenbrook, also a U Ph.D. student, spoke at the John R. Park Building, addressing the protesters.

“President Watkins has failed us. Prioritizing student safety is hard when your top priority is holding on to an over $800,000 paycheck and making sure rich, old white men are comfortable. Luckily for you, student safety doesn’t have to be an annoyance when you’re no longer in office. And we the students of the University of Utah will ensure it is no longer a bother for you,” Hardenbrook said.

Students listened at the Park Building to speeches addressing both Watkins and the abolition of the U Police Department. Hardenbrook addressed the various crimes reported to the police department, a majority of them being unjust and against people of color.

“We cannot allow one of our students to become another name we write on a sign and that we mourn in the street at the top of our lungs. We must protect their right to learn, to live and to exist on our campus without worrying about being at the unjust mercy of the police,” Hardenbrook said.

Students cheered at the idea of abolishing the UUPD within a year, and that there should be no other police/security department in charge of policing our campus.

“As a 20-year-old female college student, I have often found myself talking with my friends and peers about our experiences with sexism harassment on campus. Because of the lack of care the University of Utah has provided for victims, I have seen many students find their support system in their peers here at the U,” said Helena Proser, a sophomore at the U.

The signs held by students said many different things such as “We don’t trust U” and “Complacency is violence.” The signs were hung across the front windows and doors of the Park building as the speeches were concluded.

The U released a statement regarding the Sept. 3rd protest which states that federal law “protects the privacy and autonomy of victim-survivors who report crimes,” and the U is restructuring public safety and police services on campus after hiring Chief Safety Officer Marlon Lynch.

“The University of Utah welcomes the advocacy of its students. Safety is a top priority for the university and changes on campus over the past three years reflect this commitment. President Ruth Watkins and members of her leadership team invite representatives from Unsafe U to discuss their concerns and address several issues raised in recent online postings,” the statement said.