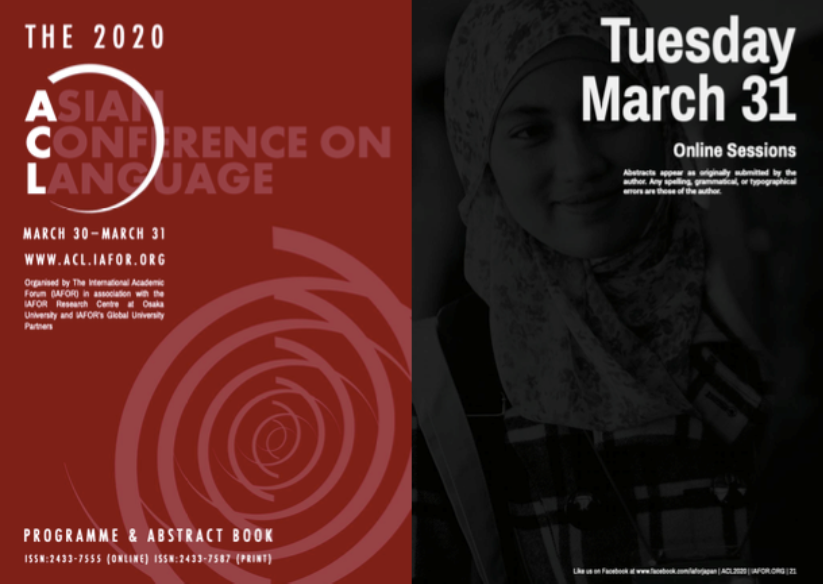 Masters of Public Health student Greta Gokey presented online at the International Academic Forum’s Asian Conference on Language on March 31. Her presentation marks the first time a UAC student has participated in an international academic conference. Abstracts of Gokey’s work can be found in the Programme & Abstract Book on the ACL website. (Image courtesy of IAFOR)

SONGDO – Greta Gokey, a graduate student in the University of Utah Asia Campus’s (UAC) Masters of Public Health program, became the first in the school’s history to present at the International Academic Forum’s (IAFOR) Asian Conference on Language on March 31, 2020. The conference, originally set to take place in Tokyo, Japan from March 29 to April 1, was relocated to an online platform due to health concerns caused by the COVID-19 outbreak. Gokey was the only student from the UAC to present after the conference’s transition online.

Gokey’s presentation, titled “The Role and Impact Teaching Assistants Have with Second Language Learners and the Acculturation Process” focused on the cultural difficulties that second-language learners, such as the UAC’s Korean students, face when transitioning between educational settings, and how the work of Teaching Assistants could be crucial in the process.

The presentation explained that most Korean students come from an educational system that emphasizes respect, silence, and a large power distance between students and instructors; meanwhile Western styles of education encourage open discussions, disagreements with instructors, and a much smaller power distance. Thus, in an institution like the UAC, where a majority-Korean student body is met with an entirely Western education system, dissonance is bound to occur.

Therefore, Gokey claims, the Teaching Assistant becomes the key to bridging the gap between unacculturated Korean students and the seemingly unapproachable Western professors. Drawing on her own experience working as a TA for Writing and Rhetoric professor Brandy Bippes, Gokey explains that an older peer with substantive knowledge can ease the cultural transition process for second-language learners, allowing them to reach the Zone of Proximal Development (ZPD), in which intuitive learning in a foreign language takes place.

Gokey states that her research is crucial to the future of acculturation methods used by second-language university students: “By integrating a [Teaching Assistant] into the classroom, they may be able to make the learning experience of younger students more effective inside and outside the classroom,” she explains.

While the hurdle of moving the conference to an online platform was safely cleared, more unexpected complications occurred during Gokey’s presentation. A group of hackers (popularly labeled “Zoom bombers”) infiltrated the virtual session, and released a barrage of expletives, racial slurs, and personal attacks aimed towards Gokey throughout the duration of her presentation. One “bomber” even posed as a student attempting to ask a question, before discharging a list of vulgarities onto the session’s chat box.

“I kind of felt like I had been robbed of a chance to make a good impression on other researchers,” Gokey reflected on the incident. The hackers were arduously blocked from the session by the conference’s moderator, who claimed that other virtual sessions had experienced similar issues all throughout the day.

UAC’s participation in the 2020 Asian Conference on Language (ACL) was a part of a new program designed by Writing and Rhetoric Department Head, Hugh Schuckman, titled the “Student Mentorship Program” in which graduate and undergraduate students collaborated with professors to co-write research articles to present at the conference.

Undergraduate students who were unable to present online included Alaina Choi, who co-wrote with new Writing and Rhetoric professor Silvia Park about the exploration of Asian-American identity and culture in popular American media; and Isabella Atanasova, in collaboration with professor Scott Morris, who planned to present a feminist analysis on the “otherworldly” on-screen portrayal of female superheroes who have yet to be granted an explicitly human identity.

Dr. Schuckman claimed that through student participation in conferences such as the ACL, faculty at the UAC will become motivated to further support and develop student research, while the school will become widely recognized as a serious research institution for both graduate and undergraduate-level students. He hopes to see an expansion of the Student Mentorship Program, with his eyes already set on the next conference, again in Tokyo, in November 2020.

Despite several initial setbacks due to coronavirus concerns, and even an unexpected turn of events during her presentation, Gokey says that her research was received quite well overall. Gokey’s work is expected to be published in the IAFOR Journal of Education in the near future – a prospect she says she is both nervous and excited for.

Gokey has asked that students who have interest in her topic of research reach out to her personally for interviews which she plans to incorporate into her work.