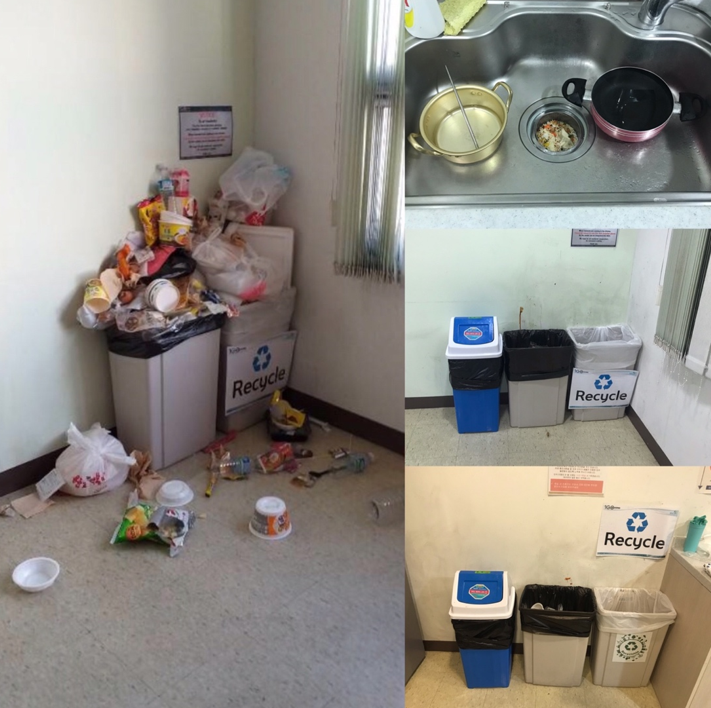 SONGDO, INCHEON – University of Utah Asia Campus (UAC) female students living in the Incheon Global Campus (IGC) shared dormitory have received a warning last Thursday, about the possibility of the IGC Housing office closing of both small and big common kitchens due to the lack of cleanliness.

Despite the number of warnings sent out to UAC shared students by the IGC Housing office throughout the semesters, there have been no visible changes in the cleanliness of both common kitchens.

Jeong Go-Woon, a UAC Psychology student and UAC’s female shared dormitory resident advisor (RA), believes that students’ poor attitude is the main reason why there was a lack of cleanliness in the shared dormitory kitchen.

“Specifically, lack of interest or possibility of using common areas. However, I think people who do not feel gratitude towards the common area and facilities would do the same to their own rooms”, Jeong Go-Woon commented.

However, Karrina, UAC Junior Psychology student and a resident of the shared dormitory thinks otherwise. She believes that the cleaners should be the ones cleaning the kitchen properly and it is ridiculous to punish students for something that their paid staff is not doing.

ICG Housing staff, whose name will not be disclosed, commented, “Students are responsible for their own cleanliness in the communal spaces. The IGC Housing office understands that there are parts of the dorm that students will find it hard to clean, that is why cleaners are hired but the cleaners are not responsible to clean up after students mess”.

The University of Utah Asia Campus Junior Psychology student, Kim Ji-An, has been staying in the IGC female shared dormitory since the 2018 Spring semester, often uses the kitchens during lunch and dinner time. Ji-An too, believes that the student’s poor attitude towards cleanliness contributes to the uncleanliness of the common kitchens.

“I think it’s because of students’ poor attitude and the lack of trash bins. Although there are some students who throw the trash away responsibility, there are not enough trash bags to accommodate the number of students in the dormitory”, she continues.

According to the RAs, they have submitted a request for extra trash bins but was declined by the IGC Housing.

IGC Housing staff, whose name will not be disclosed, mentioned that requests for extra trash bins were previously declined because the staff believed by adding more trash bins, it will lead up to students throwing their personal trash in those bins rather than bins provided in the basement of the dormitory.

As a result of the possible closing of the common kitchens and the warning on Thursday, the IGC Housing office decided to give the students another chance and added one blue trash bin per kitchen on Friday to help improve the cleanliness of the kitchens.

On weekdays, cleaners would clean the kitchen during the day meanwhile IGC Housing work-study students would collect a maximum of 2 trash bags every two days from all dormitory kitchens late at night. The weekend is when the trash builds up and starts to overflow as no one is there to clean it up.

During the 2018 Fall semester, 2019 Spring and Fall semester, the IGC Housing received multiple complains from both IGC Housing student workers and cleaners about the cleanliness of the UAC common kitchens. The student workers and cleaners would find trash overflowing the trash bins, trash scattered all over the floor, and food left in sinks during clean-ups.

In the 2018 Fall semester, the IGC Housing office gave students 3 chances to keep the kitchens clean. On the 3rd strike, students will not be allowed to use the kitchens. In the 2019 Spring semester, the IGC Housing office installed fake CCTVs in both kitchens and the hallways of the dormitory to scare the students in hopes to change the attitude of students.