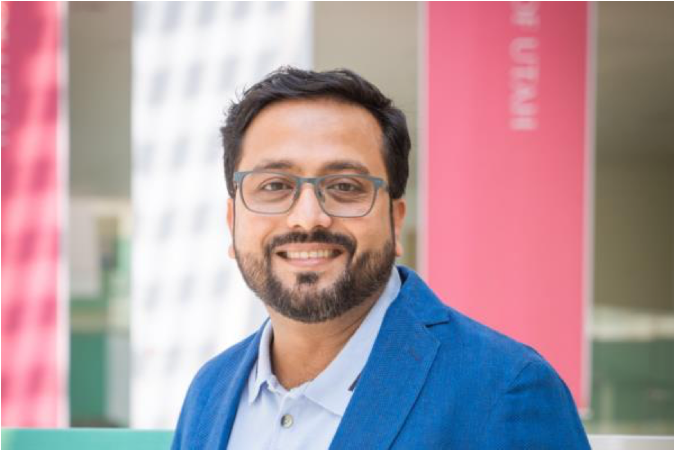 SONGDO – The University of Utah Asia Campus (UAC) welcomed its new Assistant Professor of Urban Ecology, Dr. Reazul Ahsan this fall semester, passing the torch from former UAC professor Michael Iverson. Dr. Ahsan, who received his Ph.D. in Urban and Regional Planning from the University of South Australia, has worked in the United States, the United Kingdom, Japan, Oman, and Malaysia prior to his time at the UAC.

“Urban ecology is the way that people and nature coexist,” said Dr. Ahsan, as he explained the importance the field holds in today’s world. Faced with the negative impacts of urbanization such as climate change, carbon emissions, water limitations, and more, Dr. Ahsan stated that the prospect of living in urban areas is increasingly becoming a challenge.

In order to face these challenges, Dr. Ahsan has set ambitious goals for the Urban Ecology program at the UAC. Implementing his personal philosophy of practice over theory, he plans to teach field studies courses beginning in the spring of 2020, bringing students out of the classroom and into the field to observe the realistic applications of urban ecology. He claims that courses in design and urban planning are in development as well.

In addition, Dr. Ahsan expressed his excitement at the possibility of interdisciplinary collaborations with the Civil Engineering program at the UAC. He notes that the two fields are “absolutely interdependent,” as the natural component that constitutes urban ecology and the infrastructural component that makes up civil engineering rely on each other in moving towards a more sustainable urban setting.

Dr. Ahsan also looks forward to future collaborations with other schools within the Incheon Global Campus (IGC). He predicts that the product of such collaborations would be a multifaceted program with emphases on the roles of urban ecology and engineering from economic and societal standpoints.

“One person cannot learn everything… sharing information is the best part about knowledge,” he asserted.

Before his move to the UAC, Dr. Ahsan worked in a number of different countries, at highly regarded institutions, and as a part of crucial international projects. Some of his most recent works include an effort to reduce urban risk due to climate change in Oman, where 80% of the population lives on a coastline dangerously close to submergence.

Another was his research in the Malaysian island of Borneo, where he studied the damage of the natural environment from the development of hydroelectric dams in the surrounding area. In order to conduct this specific research, Dr. Ahsan claims that he lived in the forests of Borneo with the indigenous population for months, studying the detailed effects of mega-development on the local environment.

Evaluating the urban ecology displayed in his new home, Dr. Ahsan states that Songdo is “learning,” and that it is not an ecologically sound or viable city just yet. He notes that much of the infrastructure tied with nature such as the Urban Garden is simply for beautification purposes and not for utilization.

However, development of urban ecology in cities such as Songdo or even Seoul would prove positive for them, argues Dr. Ahsan. He explains that cities that are green while maintaining their urban aspects will attract producers and consumers alike. Such a trend would allow for an influx of large companies and a higher population, resulting in a better overall economy for the cities.

Nearing the end of his first semester teaching at the UAC, Dr. Ahsan wishes to imbue a core philosophy of his to students by quoting the late Michael Jackson: “Make a better place for you and for me.” Dr. Ahsan explains that the study of Urban Ecology, in its simplest form, directly reflects the meaning of these lyrics; it aims to make the world a better place for all to live in.