The Necessity of Teaching Resistance in South Korea 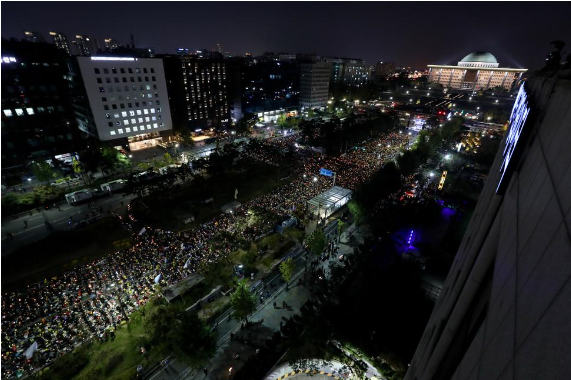 On October 19th after Cho-Kuk, former Minister of Justice, retired from his position, South Koreans held a candlelight vigil to reform public prosecution in front of the National Assembly in Yeouido, Seoul. “Cho-Kuk’s Resignation” flamed the citizens’ resentment on cartel of hierarchy in South Korea.

“Cho-Kuk’s Resignation” revealed the cartel of the education and property management. The citizens call for passing the legislation of the prosecution reform.  Then why does the candlelight vigils inspire people regardless of nationality, gender, or creed even in this modern generation?

David Underdown (1987) described in his book Revel, Riot & Rebellion: Popular Politics and Culture in England 1603-1660 Oxford “Pressure to conform were likely to be even stronger in nucleated arable villages, where people lived at close quarters and organized their agriculture cooperatively” (Underdown 1987).

Nothing is given to someone without paying in this world. Underdown (1987) pointed out the danger of social norms by saying “They did so because it reflected their notion of what society ought to be—hierarchical, unified, and cooperative.” Defensive actions are driven by conservative ideology in order to tie social structure down by making people more satisfied with existing order.

Therefore, communities should confront situations harder than the ordinary supervision of the economy such as “decisions to enclose, alter crop rotation patterns, or introduce new irrigation systems, all involved action in the courts.” (Underdown 1987) Sometimes, social tension helps to improve the society.

Social tension is necessary for political rights. The most destroyed victim was the citizens. Anger of injustice is reasonable to citizens. The courage to call out injustice and ask negotiating is necessary to not only educators but also every citizen in modern society. The previous European history shows the beauty of human beings is to keep going in spite of miserable environments with rebel, riot, and rebellion. The citizens’ courage to refute concurrent social norms with logos is significant to modern society.

Monteossori mentioned that “The pedagogical method of observation has for its base the liberty of the child; and liberty is activity.” “If she is to make it possible for him to continue in this way all his life, advancing indefinitely toward perfect self-mastery.

Since the child now learns to move rather than to sit still, he prepares himself not for the school, but for life; for he becomes able, through habit and through practice, to perform easily and correctly the simple acts of social or community life. The discipline to which the child habituates himself here is, in its character, not limited to the school environment but extends to society. “

Bell hooks said “my own struggle against the colonization process—the colonizing mind-set.” An educator is a leader of particular communities, which means social and political precursor. Then, the leader should prove the ability to deal with internal enemies when danger threatened. Bell hooks instructed humans to challenge asking or negotiating to opponents.

Individually, every student should emphatically and critically examine their standpoints. Students should transform their consciousness as a first stage in the process of politicization which is deep sense of awakening.