Trying to fit in With Sayaka Murata’s ‘Convenience Store Woman’ 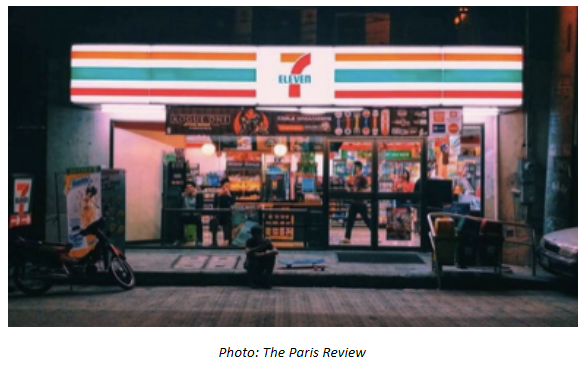 Sayaka Murata’s Convenience Store Woman is, subjectively, the weirdest book I’ve ever read, in the best way possible. Published in English in 2018, the novel follows 36-year-old Keiko, an off-beat ‘Smile-Mart’ cashier who has been working at her local convenience store for the past 18 years.

In a society as strict as Japan’s, Keiko faces continuous judgement regarding her career choice, marriage status, and other life decisions. but finds solace in the controlled interactions within her convenience store, claiming it is the first place that anyone ever taught her to act normally. However, things begin to topple over when lazy new recruit Shihara convinces Keiko of her shortcomings, coercing her to conform to the ideals of society.

This novel was a one-day read for me; although it was quick and painless, I found myself wishing a few changes had been made. For one, the general plot and introduction of Shihara felt just a bit forced; on top of that, he played such a small role outside of the few moments that had to do specifically with him, that I felt Keiko could’ve come to similar conclusions without Shihara’s influence. Because of this, the story tended to feel disconnected at times not only from the plot point, but from reality and the purpose it was being told.

Still, ‘Convenience Store Woman,’ did do a few things I appreciated. For one, it was truly interesting to gain insight into Keiko’s mindset. Since the story was written primarily from her viewpoint, it feels as if the reader is experiencing every moment of confusion alongside the main character. There is also a sense of self-awareness to the story, as Murata seemed to understand that the general context of the novel could come off as silly to readers and playfully used dark-comedic moments to combat this.

What intrigued me most about ‘Convenience Store Woman’ was how it spoke regarding the pressure to conform in current day society. Keiko herself is an undeniably ‘quirky’ character, but through the telling of her story, the reader is able to not only connect but truly empathize with her. Murata did an amazing job of capturing the essence of ‘same-ness’ that seems to have permeated Japanese society and showcasing how that affects individuals.

Interestingly enough, it felt as though watching the world through Keiko’s eyes allowed me to better confirm and address my biases regarding normality. Preconceived notions make it easy to read ‘Convenience Store Woman,’ and simply be off put by the character’s behavior, but Murata’s writing seems to keep dragging you back in. In the end, I was able to better understand those who may be different from me and find prejudice in myself I never knew existed.

Overall, ‘Convenience Store Woman,’ was definitely the oddest book I’ve ever read. It was quirky, confusing, heart-wrenching, hilarious, eccentric, and eerie all at once, and though there were definite good and bad moments, the message is one I would recommend every to acquaint themselves with. Sayaka Murata has truly mastered leaving her readers not only contemplating, but seeking change in themselves.