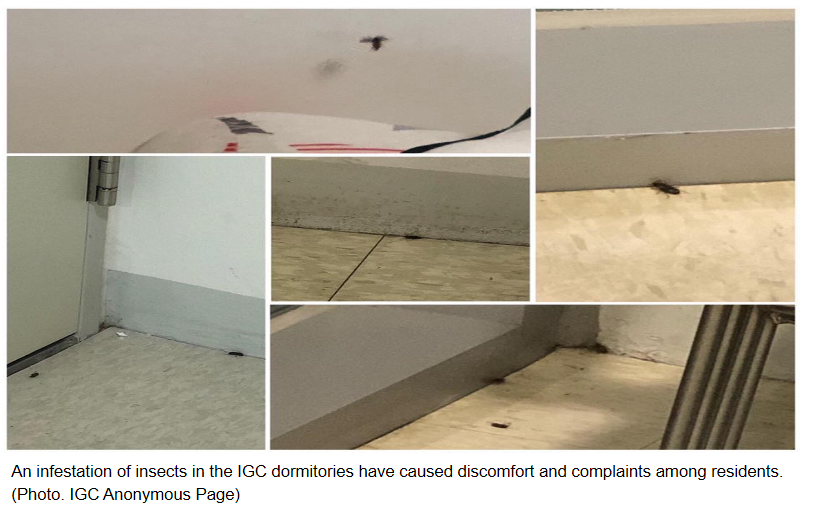 SONGDO – Dormitories at the Incheon Global Campus (IGC) have been facing an infestation of roaches, bugs, and vermin since the beginning of the fall semester in August of 2019. Reports of infestation have predominantly come from the female building of Dormitory B, ranging from the 4th to the 26th floor.

However, one IGC Housing officer stated unofficially that there could be multiple reasons for the infestation. Among them include a lack of cleanliness within common spaces, food waste in the kitchens, and the possibility of bugs and insects coming from abroad with international students.

“We’ve had similar complaints in the past,” the Housing officer stated, “but we are actually cleaning and spraying the dorms after each semester, which is more than is legally required.”

Residents have voiced their frustration on the matter directly to IGC, or through social media platforms such as the unofficial IGC Facebook page, “IGC – 인천글로벌캠퍼스 대신 전해드립니다” (IGC Anonymous Page). The page reports 19 separate bug sighting instances, one bat sighting, and one rat sighting so far.

In a recent interview, an anonymous IGC resident stated that the organization needs to take more responsibility to prevent the issue: “If they have received similar complaints in the past, they must know that it’s a recurring problem… they need to do additional spraying, put traps out, or even just explain to residents how to take care of the facilities through emails or notices instead of simply pushing blame onto the residents.”

The Incheon Global Campus is a collection of extended campuses from 4 schools: the State University of New York, Ghent University, George Mason University, and the University of Utah. The campus was established in 2012 and has future plans to expand to 10 schools by 2025.

With the vision of creating the best global education hub in Northeast Asia, the IGC opened its doors to students looking for a global educational experience in South Korea.

The IGC has connections with the Incheon Free Economic Zone (IFEZ) and provides employment opportunities with the United Nations and international corporations such as Samsung, POSCO, BMW and Boeing.

There are several state-of-the-art facilities within the IGC, including a Multi-complex building, library, swimming pool, faculty housing, and guesthouse. The IGC provides one double room dormitory and two single room dormitories for male and female residents and claims on its website to have “pleasant residential conditions.”

Frustration among residents are steadily rising, as one anonymous resident states, “IGC need to care more about its residents’ complaints… they need to take better precautions and prepare for this seasonal issue.”