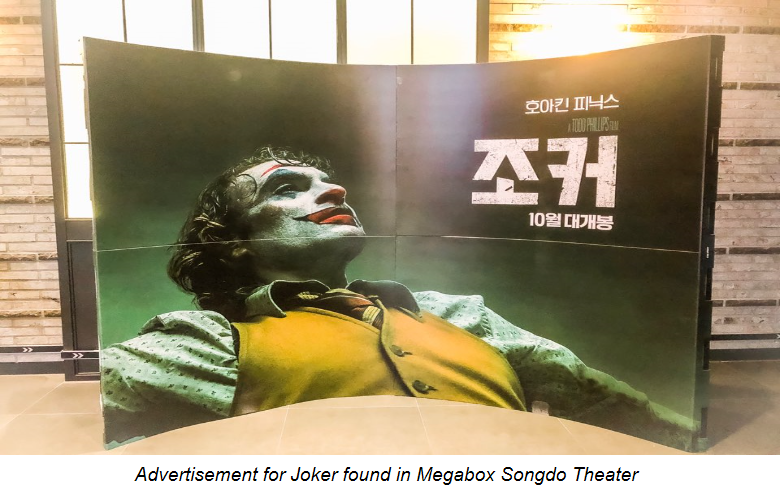 SONGDO – The wait is over for many movie-lovers awaiting the new DC Comics movie Joker. Since the trailer was released several months ago, the film has reached peak interest among several audiences around the world.

In South Korea, Megabox- Songdo’s ultramodern theater in Triple Street Mall has been very busy since October 22nd with the DC movie Joker (directed by Todd Phillips, starring Joaquin Phoenix as the Joker).

Megabox’s popularity among college students in Songdo’s six universities and the general public is peculiar. The theater is located within walking distance many universities within the city, the building has seen a surge of students eager to watch the movie on the big screen since last week. The movie has gained massive popularity among both the student crowd and the general public, and with said popularity brings many diverse opinions both in favor of and against it.

Despite also receiving mixed reviews, Joker has also seen many positive reactions, and many have praised Joaquin Phoenix’s unique take and performance as the Joker; however, it has also received a lot of criticism for being excessively graphic and grim. The movie is also controversial within many social circles because of the new actor playing an antique character, and many people fearing that a modern take on a classic story may corrupt it. These bad reviews and hesitations from some do not seem to be turning away any new viewers, though, and seems to only add to the buzz that has made this film a “must watch” for many. Both skeptics and fanatics alike are eager to watch the new movie to determine how well it captures DC Comics’ essence as well as play homage to a powerful character.

“Because it looked popular… it’s part of a DC comic, so I feel like that’s very mainstream” said Sarah Higashi who is a student at IGC.

The primary reason many students at IGC are going out to watch the movie is due to the recommendation and influence of fellow students on campus.

“I went since all my friends were gonna go see it [and] I had free time” said another student who attends the University of Utah Asia Campus. The movie has created such a great reaction from viewers that others are being influenced to watch the movie as well.

Despite having mixed reviews, Todd Phillips’ Joker has broken several records in the first week of showings alone. The film’s accomplishments to date include, but are not limited to  receiving $92.5 million in United States box office sales, $234 million in box office sales globally, as well as earning the Golden Lion award, the most prestigious award from the Venice Film Festival. Also up to this point, it has taken more than half the box office in South Korea at 52% as well as receiving $2.3 million in revenue on the opening day alone.

Since sales are in high demand, seats at the theatres are coveted and people are in a rush to watch the film while it is still showing. According to Megabox, the movie may still be available to watch in theaters perhaps even until November if there is continued demand. Since showing times are limited, viewers are encouraged to go and watch the movie now while it is guaranteed to be in theaters here in Songdo.