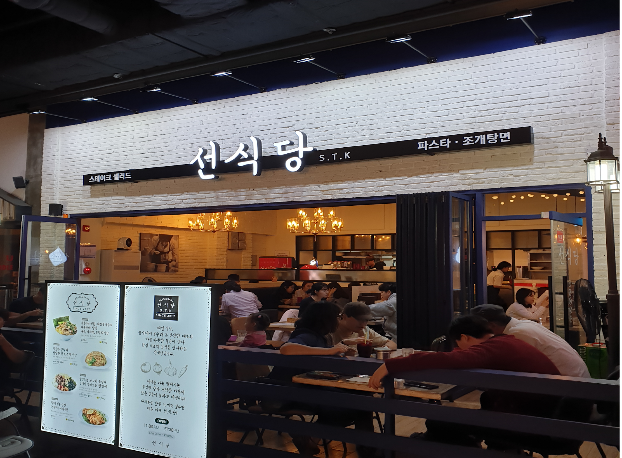 Sunsikdang is known for its affordable prices and  large amounts of food. The restaurant is very cost-effective because their menus are not expensive compared to the amount of food. These advantages caused people to flock to the restaurant through word of mouth, this restaurant became a hot place with a lot of people. Their popular menu items are shellfish soup noodles, grill steak salad, and Jambalaya pineapple fried rice. These menus are all under 10,000won, which is very affordable compared to other fusion restaurants.

Taehyun Kim, a customer of this restaurant said, “I think prices in Songdo are a bit more expensive than other areas in Incheon. It is difficult to find some affordable or cost-effective restaurants near the Songdo area. I think having a meal in Sunsikdang has less pressure on the prices of food. Their taste is not so special, but I came here a lot because of their affordable price and a huge amount of food.”

Besides ordering, most other actions, like getting side dishes or water, has to be by yourself, including wrapping up the leftover food. This system is because there are so many people inside the restaurant and the staffs are too busy. Opening hours of Sunsikdang is 11a.m to 9:30p.m every day and break time is 3p.m to 5p.m.

Triple Street is a shopping center located in Songdo near Technopark Station and Hyundai Premium Outlet. There are many restaurants in basement 1 (BF1) in Blocks B and C. Sunsikdang has opened in the location where the restaurant named Shaybana used to be, near the entrance of Block C.